Boys' hockey: Pirates struggle but come away with the ‘W’ over Panthers .. Courtesy Of Crookston Times 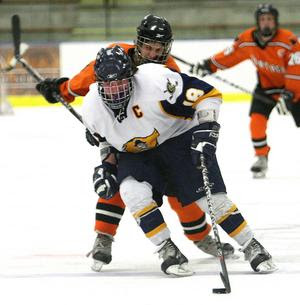 
CROOKSTON, Minn. —
The Pirates didn't play their best against Park Rapids Tuesday evening but still pulled out a victory with a late goal by Seth Heppner in the third period for the 3-2 win. Crookston is now 10-11-2 on the season and, with the win over section rival Park Rapids, 5-4-1 in Section 8A play.

"Things weren't very crisp. Park worked hard, they never gave up. They were around, around, around all night long. Skill level for one, finishing off for two. We didn't seem inspired or enthusiastic about what we were doing out there. We were playing like it was open hockey. There is a difference in competitive hockey."

With just two games left in the regular season, all the Pirates need to get enthusiastic or their postseason will be short.

"We have to be unselfish," coach Bittner said. "We need to play with a greater purpose. Heppner's line has been on fire. They're playing well, getting scoring opportunities. Dylan Klatt had a great game, Seth's been scoring and Reggie has been putting puck in the net too."