Keeway Gaaboo .... A Symbol Of Pride For Fighting Sioux 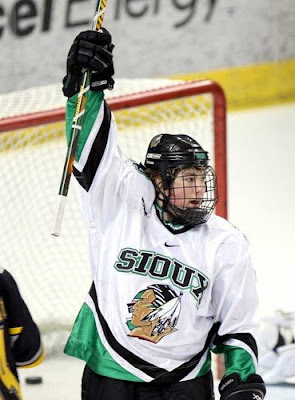 The journey of T.J. Oshie has many twists and turns along the beaten path since 1991.

From 1991-2002, Oshie was a member of the Seattle Jr. Hockey NW Admirals AAA Hockey Club who participated in the Pacific Coast Amateur Hockey Association, based in Vancouver, British Columbia, Canada.

For Oshie, it was a vision of things to come in his young career.

In the summer of 2002, Oshie traveled along with his family to attend the Hockeytown USA Hockey School in Warroad, Minnesota. When he left, he knew the Warroad H.S. Warriors were his destiny.

Prior to his arrival in 2002, Oshie, along with his father, Timothy, brother Taylor and sister, Tawni, each received their Ojibwe names from a spiritual elder named Joseph Big George, from the Buffalo Point Reserve in Canada. The Oshie’ met with Big George in a Pow-Wow a week earlier at the Buffalo Point. They presented him tobacco in his sacred bag located next to his spiritual drum. From there, Big George smoked the tobacco and dreamt of each of their names within a week. Oshie’ cousin, former NHL player, Henry Boucha, gathered family and friends to witness the sacred ceremony of the Oshie’ earning their namesakes in Ojibwe.

The ceremony had spiritual overtones to it as T.J. was given the Ojibwe name, Keeway Gaaboo, meaning in English translation, “Coming Home”. Little did Oshie realize he was following in the footsteps of grandfathers Richard and Buster Oshie, great-great- uncle Max Jones and great-uncle Max Oshie and the proud lineage to the Chief, Na-May-A-Poke, who is T.J.’s great-great-great grandfather. All were born and raised in Warroad, MN, and were hockey legends back in 1930’s and 1940’s. Boucha, a second cousin, later in 1972 became the first of the descendents to reach the National Hockey League.

A couple years later, cousin Gary Sargent became a member of the Los Angeles Kings and later the Minnesota North Stars before his retirement in 1983.

The other members of the Oshie lineage include Kaa-Kaa-Gee-Sick, the medicine man who lived to be 120 years old before his death in 1968; Little Thunder (Boucha’s direct lineage); and Laughing Mary, the only daughter to A-Osh-A-Wash, the original Chief of the Warroad Band of Chippewa Indians from the mid-1800’s.

His grandfather, the late Richard Oshie, had passionately spoke about the Warroad mystique and subsequently interested the younger Oshie with his stories and depictions of one of Minnesota’s most storied hockey programs.

After the passing of the elder Oshie in 2001, T.J. visualized Warroad, Minnesota, as being his opportunity of a lifetime to proudly don the Warrior crest on his new jersey. After the two-week camp in Warroad, Oshie ventured back to Washington, to officially prepare him for his next journey in his young hockey career, to play for the Warroad Warriors.

Once there, he made the most of his opportunity leading the fabled Warrior hockey program to three, consecutive Minnesota State High School Hockey Tournaments from 2003-05. In those three seasons, Oshie would capture two, Minnesota Class “A” titles and earn All-Tournament Team honors each season. In the 2005 championship tilt, he set up teammate Aaron Marvin while diving on his stomach for a loose puck just after a face-off. The play was in the second overtime session versus Totino-Grace of Fridley and led to the game winning goal by Marvin. The play personified Oshie’ character, so much, that the St. Louis Blues selected him as their 2005 NHL 1st round draft choice.

Next for the young Oshie was entering the University of North Dakota as a true freshman later that summer and become a member of the Fighting Sioux Hockey Family.

The young Oshie solidified his worth of why he was a St. Louis Blues draftee. And it didn’t take long either. After garnering a goal and assist versus Miami (Ohio) in his first game, he would go on to earn 45 points in the very difficult Western Collegiate Hockey League and secure a spot on the WCHA’s All-Rookie Team.

With the lineage that dates back to the early settler’s era of Minnesota, it’s clear that T.J. Oshie is the symbol of Native America for both the Warroad Warriors and the University of North Dakota Fighting Sioux. Even though the Sioux were opponents to the Chippewa’s around Warroad’s River and the southern shores of Lake-of-the-Woods, the lineage of Oshie’ ancestry remains strong and forthright.

Oshie will take his Fighting Sioux into battle this Thursday, April 10, 2008, with the hopes of capturing a NCAA Men’s Hockey championship. He will be one of twenty-five dedicated young men to proudly wear that coveted Fighting Sioux sweater and battle the likes of Boston College, Michigan and Notre Dame.

And if you listen very closely at the Pepsi Center in Denver, Colorado, the site of the 2008 NCAA Frozen Four Men’s Hockey Championships, this weekend, you might just hear the battle cry’s of Oshie’ proud heritage. Mind you, this time as a member of the Fighting Sioux, and not as a proud Warroad Warrior.

Miigwetch Niigee (Many Thanks My Friends) In Ojibwe Language
Posted by Oshie-Blogs at 3:37 PM

I like this post, its too bad and a shame that we are going to lose this great logo.