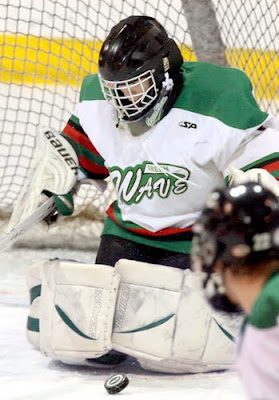 The Americans eventually shocked Canada in overtime, but it was the East Grand Forks Senior High boys hockey team that pulled off the first stunner of the night.

The Green Wave, behind sophomore goalie Hunter Aubol’s 32 saves, held on for a 2-1 win over No. 3-ranked Warroad.

“It’s been about two years since anyone in the section has beaten Warroad,” Senior High coach Cory Chupka said. “Our guys continue to take steps forward. They showed tonight that they can win against a quality team.”

The Warriors dropped to 9-2, while the Green Wave improved to 5-9.

“That’s the biggest win in my hockey career,” said Aubol, who was starting his fifth game of the season. “We knew we had to play hard. We knew they were going to come hard . . . it’s Warroad.”

The Green Wave, who were outshot 33-24, never trailed.

Senior Jake Useldinger scored a goal at 13 minutes, 47 seconds of the first period. With four seconds left on a power play, Useldinger came into the offensive zone along the right side and tucked a shot to the short side, underneath the stick of Warroad goalie Shawn Storey.

After a scoreless second period, Senior High spread the lead to 2-0 with a fortunate bounce. With eight minutes left in the third period, Casey Ristau attempted a centering pass to Zack Lawdermilt from the end line. The pass managed to knock off the skates of Storey and into the net for the eventual game-winner.

“(Senior High) out-worked us,” Warroad coach Albert Hasbargen said. “You aren’t going to win many games if you don’t win the little battles and the little races. We had some scoring chances, but not enough. That comes with not winning many battles.”

The Warriors wouldn’t go quietly. Just as Warroad pulled its goalie with 1:27 remaining, UND-recruit Brock Nelson punched home a rebound to make it 2-1.

Warroad put on pressure for much of the remaining 87 seconds. Warroad spent the final 26 seconds in the Senior High zone, but Aubol didn’t falter.

“The puck was really bouncing around,” Chupka said. “The kids kept their cool, both on the ice and on the bench.

“Hunter Aubol stepped up, obviously, making those saves at the end. He’s battling and competing.”

After spending most of the season in a three-goalie rotation, Aubol has played well in two straight games.

“He’s just getting more confident,” Chupka said. “He’s doing the fundamentals and giving us a chance to win in the third period.”

It was Warroad’s first loss to a Class A opponent this season.

“We’ve got to be mentally ready every time we step on the ice,” Hasbargen said.

Key play: Casey Ristau’s goal for a 2-0 lead with 8 minutes left in the third period.