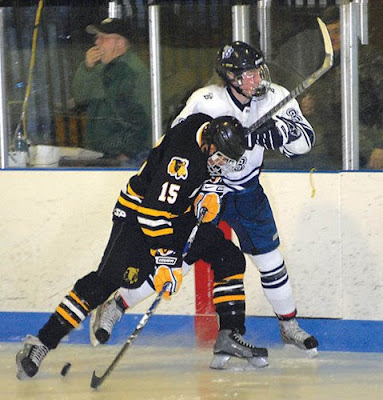 Courtesy Of Bemidji Pioneer
By: Jim Carrington
The Warroad Warriors ended Bemidji’s long trip through the top ten of the Class A hockey standings Friday night, spanking the Jacks 7-2 before a good turnout at the Nymore Arena. It included a sizeable turnout of Warroad fans.
Warroad had taken the first meeting 7-1 at home.
The visitors looked every bit like a potential state champion raising its record to 22-1.
Bemidji dropped to 11-11-1 with games at Detroit Lakes Tuesday and at home with Coleraine Thursday, two games it figures to win.
The Warriors dominated the game out shooting Bemidji 44-19 .
They scored four times in the second period to take a 5-0 lead and started the clock running for a four minute stretch in the third after moving to a 7-1 lead.
Bemidji turned the clock off four minutes later with its second goal of the night.
Dane Shaugabay had a hat trick while Micky Knox scored twice and Brock Nelson and Chris Sylvester once.
Lucas Phillips and Steve Heller had the Bemidji goals, both in the final period.
The hard hitting game drew 14 whistles, seven on each team.
Bemidji was 1-7 on the power play while the winners scored twice and added a short handed goal.
Bemidji stayed close for a period though out shot 13-6.
Knox had his first goal at 6:12 at the end of an odd man rush, one of many Derek Dudgeon would face during the night.
But Warroad continued the barrage, out shooting Bemidji 15-4 in the second period.,
Knox added his second goal in the first two minutes and Shaugabay followed with his first pair two minutes apart, the first on a power play with Lucas Phillips gone for tripping.
The second followed a 15 minute delay to replace a sheet of plastic discharged by hard hit at the south end of the rink..
Nelson completed the period with a short handed goal at the end of a 2 on 1 rush with teammate Carson Gray gone for holding.
Phillips put Bemidji on the board to start the final stanza on a power play but Shaugabay matched that on a Warroad power play three minutes later and Sylvester’s tally at 9:47 started running time.
Heller ended it at 13:27 with his first varsity goal with Rylee Curb and Joe Welle getting the feeds.
Warroad held a 16-9 shots bulge in the stanza with Brett Dokken playing the final four minutes, making four stops.
He and Dudgeon ended with 37. Jason Goldsmith had only 17 for the Warriors.
Warroad also took the B Game 2-0, scoring twice in the first period though piling up a 31-15 shots advantage.
Jeremiah Graves played an excellent game in goal for Bemidji. Shawn Storey was the Warroad net minder.
The B Team dropped to 14-8-1.
Posted by Oshie-Blogs at 11:55 AM