Warroad Rolls Into Section 8A Tournament 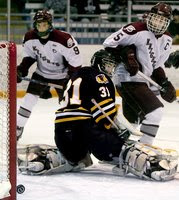 If Warroad High School had any perceived weakness entering this boys hockey season, it was in goal. Senior Jason Goldsmith, with just two periods of varsity action to his credit entering the season, erased any doubts in a hurry with three shutouts in Warroad’s first four games.

WARROAD, Minn. — If Warroad High School had any perceived weakness entering this boys hockey season, it was in goal.

Senior Jason Goldsmith, with just two periods of varsity action to his credit entering the season, erased any doubts in a hurry with three shutouts in Warroad’s first four games.

The steady play of Goldsmith (1.55 goals-against average, .911 save percentage) and the dynamic top line of juniors Brock Nelson and Brett Hebel and senior Dane Shaugabay are among the reasons why the Warriors are favored to repeat as Minnesota Section 8 champion.

The Warriors, 23-2, enter Thursday’s section quarterfinals at The Gardens Arena in Warroad with a 13-0 record at home, the No. 1 seed in the section and a 10-0 record against Section 8A opponents this season.

“Our record doesn’t surprise me,” Goldsmith said. “I think it surprised everyone else in the section and in the state, because they thought we lost a lot of guys from last year and would be down this year. We took that as momentum for us going into this year.”

Goldsmith has provided the steady goaltending coach Albert Hasbargen was looking for. The power line of Nelson (35 goals), Shaugabay (25) and Hebel (17) has combined for 77 goals, more than three a game.

“Our scoring has been spread out pretty good,” Hasbargen said. “Even if one team tries to shut down one line, we have others who can score.”

The depth of Warroad extends to the coaching staff. Two of Hasbargen’s assistants, Bruce Olson and Dennis Fermoyle, have won Minnesota state titles as head coaches, joining Hasbargen in that distinction.

Nelson, a 6-foot-4, 180-pound center, is drawing considerable interest from college recruiters, though he says he’s always been a UND fan. He has not made a verbal commitment.

Nelson has more than doubled his goal output from last year (15) to this year.

“He just has a knack with the puck,” Hasbargen said. “He seems like he’s got stickem tape on both sides of his stick blade. He’s a kid who can find the twine, something you don’t coach.”

Warroad’s biggest challenge could come from No. 2 seed Thief River Falls, which lost 3-1 and 5-1 to Warroad this season. The Prowlers are spearheaded by the section’s top goalie in junior Zane Gothberg (1.49 average, .937 save percentage).

“Any time you’ve got a boy who can win a game by himself, that makes the team pretty dangerous,” Hasbargen said of Gothberg and the Prowlers.

“We’ve had a lot of guys step up and play pretty awesome,” Nelson said. “Hopefully we can make it down to state again and win it all.”
Posted by Oshie-Blogs at 10:59 AM