OLYMPICS 2010: They were the first U.S. owners of hockey gold .. Roger Christian retrieved his white USA hockey jersey from the 1960 Winter Olympics from the bedroom closet .. Courtesy of Grand Forks Herald 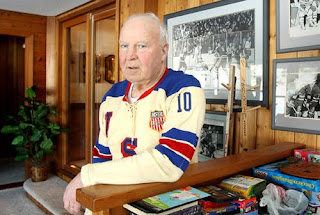 
Actually, the No. 10 jersey now is closer to yellow than white, showing what 50 years can do to wool. But his medal is just as gold as ever. And his smile when reminiscing about those days in Squaw Valley, Calif., hasn’t dimmed a single watt.

“You know,” he said Wednesday from his home on the Warroad River, “when you play seven games in the Olympics and all of them go well, that’s pretty thrilling, pretty special.”

It was also special for him that the current USA hockey players wore replicas of the 1960 team’s white — not yellow — jerseys when they upset Canada on Sunday, showing that the style still carries good karma. Even more special was that Roger, next-door neighbor/brother Billy Christian and other 1960 team members also received the same jersey, making them replicas of the replicas.

They’re different from the originals in that the material is a synthetic blend instead of wool and the players’ names are on the back, a custom that hadn’t been invented 50 years ago. For Christian, the thrill was from being remembered.

“It was a tear-jerker when he opened the package,” said Jean Christian, his wife of 49 years.

Roger watched the entire United States-Canada game Sunday, but otherwise his viewing of the men’s team has been limited. He has spent more time watching the women’s team because it includes Warroad’s Gigi Marvin.

“I’ll watch for a while, do something else and come back and check on it later,” he said. “I’m not much of a TV guy.”

He spends more time on woodworking in his garage. And every day at 5:30 p.m., Roger and Jean take dinner to Roger Jr., who has spent the last 11 years at the local care center after a snowmobile accident. The hockey they’re most interested in is played by their four grandchildren, ranging in age from 10 to 13.

He has handed down most of his Olympics’ memorabilia to the hockey-playing grandchildren and his three sons. At least for now, he has kept the original white jersey because the only time he wore it was in the final game, when he scored four goals as USA rallied past Czechoslovakia for the gold medal. He also played a major role as USA defeated the Soviet Union for the first time ever, assisting on both of his brother’s goals in the 2-1 win.

“People always said they liked to watch us because we passed so well,” Roger said about his brother, who spends winters in Florida. “We knew where each other were without having to look.”

Although beating the Soviet Union and Canada on the way to the 1960 gold medal was a big surprise, it didn’t grab the attention of being a “miracle” as it was for the 1980 USA team, which included Roger’s nephew David Christian. It was a time when the USA needed some good news because the Cold War was heating up with the Soviet invasion of Afghanistan, the Iranian hostage crisis and the OPEC oil shortage.

“In 1980, the world was in an uproar,” Christian said. “And very few people in our part of the country even had TV in 1960. The little TV we had around here was pretty snowy.

The significance isn’t lost on Hockeytown USA, however. “I’ve showed my medal in Warroad about 1,000 times the last couple of weeks,” Roger said.

Framed photographs in the sunroom show it was a different era of hockey. It was a time of no visors, no helmets, very few slap shots and no multi-millionaire pros.

“After the final game, the Soviets asked us what we were going to get for winning the gold,” Roger said. “We told them we were getting a kick in the rear and then going back to work.”

That was half-true. A week after winning the gold medal, the Christian brothers were working construction in Crosby, N.D., and playing amateur hockey north of the border.

“In those days, you could make more money working than playing in the NHL,” he said.

“For American kids, the Olympics was as high as you could go.”

Roger, 74, is a member of the U.S. Hockey Hall of Fame and the only player on the Warroad Lakers amateur team with his jersey retired. With Billy and David also as Olympians and the success of the family hockey stick company, the Christians are regarded as the “first family” of American hockey by some.

The brothers were credited for more than their on-ice skills in capturing gold. Historians say the brothers also played a key role in establishing team harmony.

There was dissension when several team members, including Herb Brooks, were dumped in favor of other players, including brothers Bill and Bob Cleary of Harvard, just prior to the Olympics. The players first voted to go home if their teammates weren’t reinstated.

“Our team manager told us that we’d better go back and vote again because otherwise we’d never play another game of organized hockey in our life,” Roger said. “We then decided to give the newcomers the silent treatment.”

Historians said the Christians broke the ice, so to speak. Roger said that’s only partly true.

“We were brought up to talk to people who talked to you,” Roger said. “They started talking to us at the dinner table. When you’re from a small town, you talk back.”

Tensions eased, the skilled Cleary brothers helped them win, the animosity lifted and the first miracle hockey team won a gold. And, 50 years later, they have both white and yellow jerseys to prove it.
Posted by Oshie-Blogs at 10:06 AM