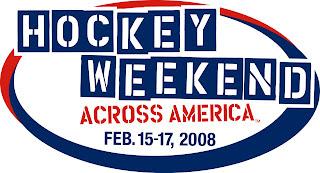 By: Timothy Oshie
(Information Provided Courtesy Of USA Hockey)
USA Hockey, the grassroots program started back in the 1930's, has launched a very special event this weekend.
Celebrate USA Hockey and all the wonderful memories your family has had over the decades in this great game of hockey.
This weekend marks a very special event. USA Hockey has proclaimed February 15-17, 2008, as officially, Hockey Weekend Across America.
Friday, Feb. 15 - Wear Your Jersey to School Day
• Show your hockey spirit by wearing your favorite jersey from any level of hockey (youth, high school, college, pro, etc.) to school.
Saturday, Feb. 16 - Bring a Friend to the Rink Day
• No matter what the event is (a youth game, an open skate or a professional game) do your best to bring a friend to the rink to introduce them to the sport.
Sunday, Feb. 17 - Celebrate Local Hockey Heroes Day
• Honor your favorite coach, timekeeper, official, player, etc., through a special recognition event. Use the day as a fund-raising effort for you association and just plain show the community what hockey has done for them.
Hockey Weekend Across America’s objective is to celebrate hockey and all those involved in the game at all levels and also expose the game to additional audiences to attract more players, coaches, officials and volunteers to the sport.

“It's terrific to see all the things happening around the country as part of Hockey Weekend Across America,” said Dave Ogrean, executive director of USA Hockey. “I commend the entire hockey community for its enthusiastic participation.”
Listed below is a partial list of events happening around the country in conjunction with Hockey Weekend Across America, as well as a rundown of special programming airing on NHL Network in the United States as part of the celebration. Also listed are special interviews taking place on XM Radio’s Hockey This Morning on channel 204.