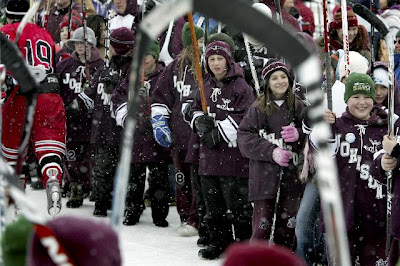 As Minnesota celebrated its annual Hockey Day, many bemoaned the dearth of rinks outdoors -- and the free time to play on them.
By DAVID La VAQUE, Star Tribune
Cory Ellis and several of his St. Paul Johnson hockey teammates grew up experiencing the occasional outdoor practice or game. He could not recall, however, the last time he walked to a rink.
The Governors took part in Saturday's Hockey Day Minnesota, a daylong celebration of the sport, by playing Rochester John Marshall outdoors at Phalen Recreation Center. They arrived by foot, trudging the half-mile from Johnson High School to Phalen, where long ago the Governors played all their varsity games.
"We thought it was going to be a long, cold walk," Ellis said. "But it pumped us up to play. We walked down the street talking about how we're playing for our community."
Ellis scored two goals in the Governors' 4-0 defeat of the Rockets, delighting most of the estimated 1,800 fans who shrugged off cold temperatures and falling snow to enjoy a rare outdoor high school hockey game.
Dropping the ceremonial first puck was former Johnson coach Lou Cotroneo, who was an assistant from 1955 to '63, head coach from 1964 to '74 and one of a few people in attendance Saturday who experienced high school hockey as a primarily outdoor game.
The Governors' run of state titles in 1947, 1953, 1955 and 1963 earned them the nickname the "Grand Army of Phalen Creek." They were really weekend warriors, kids who grew up taking their lunch to the rink but took little time to stop skating and eat.
As a youth, Skip Peltier (Class of 1965) skated on Hastings Pond -- site of the current Johnson High School's athletic fields -- and at Phalen. Those frozen surfaces became melting pots where Peltier, his brothers and their buddies could skate with the Johnson varsity players they so admired.
"That builds tradition," said Peltier, who played on the 1963 title team. "You didn't want to be on the team that dropped the ball."
Posted by Oshie-Blogs at 6:55 PM