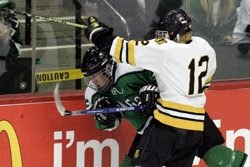 Roseau and Warroad square off for the latest game in their longtime rivalry
Courtesy of Hockey Hub's "The Breakdown"
By Tim Kolehmainen, Editor
I’m not sure there’s a better high school rivalry in any sport, anywhere in the country than the annual Roseau-Warroad clash. Sure, some of the edge has been taken off in recent years because the two teams don’t compete for the same section title anymore. Some will say Moorhead is a bigger rival for Roseau now and that Warroad has to compete with Thief River Falls, East Grand Forks and others. But the history involved in the series can’t be beat. Even the New York Times featured the game back in January 2007.
http://travel.nytimes.com/2007/01/26/travel/escapes/26hockey.html?pagewanted=print
I won’t try to compete with the eloquence of the Times, which compared the two towns just 20 miles apart on Highway 11, saying that “like most great rivalries, this one is between two places that are more alike than not.” Warroad boasts of Henry Boucha and the Christian family and its amazing run of Olympians. Roseau can claim Rube Bjorkman, the Broten family and a sizeable clan of NHL alumni.
The Roseau Rams hockey website has a specially-dedicated page breaking down the game’s history, on which they can brag of a 92-57-4 edge. The Rams have also won the past four meetings.
http://www.roseauramshockey.com/rams_warriors/Rams_Warriors.htm
Warroad has hope of turning that around this year after surging to a 12-1-0 record through a baker’s dozen games. The Warriors have been very stingy defensively for goalie Jason Goldsmith (11-1-0, 1.45 GAA, .914 save %) thanks to the play of top defensemen Michael Pieper (2-9-11), Tai Larson (2-9-11), Carson Gray (3-8-11), Joey Olson and Eric Milbridge.
Up front, the Warriors are plenty potent, having pumped in 71 goals in 13 games. Brock Nelson (17-14-31) leads the way, but is followed closely by Brett Hebel (8-16-24), Dane Shaugabay (7-16-23), Chris Sylvester (13-7-20) and Mickey Knox (7-10-17). Warroad was expected to get a challenge in Section 8A after losing several top players to graduation, but as the Warriors usually do, they just churn out good hockey players.
After two straight years of competing for the state title (and winning it all in 2007), the Rams have stumbled a bit thus far with a 6-5-2 record. They’ve yet to put a winning streak together and earlier were shut out by section rival Moorhead, 5-0.
Roseau has played without one of its top players, Nick Oliver, who just returned to the lineup after missing much of the first six weeks with an injury suffered while playing for the USHL’s Fargo Force. In just two games, he’s already tallied two goals and two assists and given them a big lift. But the Force also nabbed All-State goaltender Mike Lee before his senior season and fellow All-State junior (and Mr. Hockey) Aaron Ness graduated early to attend the University of Minnesota.
Roseau still has firepower with Tyler Landman (9-17-26), Adam Knochenmus (14-10-24), Shane Omdahl (6-11-17) and the return of Oliver. But they’ve only received 17 goals from the rest of the lineup. In nets, coach Scott Oliver has rotated three goalies in an attempt to find a replacement for Lee: Brady Wrightsman (3-1-0, 3.29 GAA, .845 save %), Ethan Kvidt (2-2-1, 2.48 GAA, .892 save %) and Allen Mekash (1-2-1, 3.11 GAA, .875 save %).
Common opponents: Thief River Falls (Roseau won 3-1, Warroad won 3-1), East Grand Forks (Roseau won 6-1 and 7-3, Warroad won 10-3), Lake of the Woods (Roseau won 8-2, Warroad won 4-0), Hibbing (Roseau tied 5-5, Warroad won 5-0) and Grafton-Park River, N.D. (Roseau lost 6-3, Warroad won 3-1).
Posted by Oshie-Blogs at 9:18 AM