2010 Minnesota Hockey WEST REGIONAL Pee Wee "A" Tournament At East Grand Forks .. Results From Friday - Saturday .. History Made As Both Teams Pulled Their Goaltenders In Moorhead vs. Centennial Game Tonight 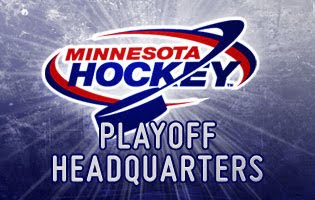 Moorhead 8 - Centennial 2
This game seen a little of everything tonight.  I served as a goal judge throughout the afternoon and witnessed what I'm saying is a hockey oddity.  With Moorhead having to win by a minimum of (6) goal margin, the game started fast and furious.


Moorhead jumped out to a 3-0 lead at one point then had a 5-1 lead.  Centennial cut it to 5-2 in the third period and the young Spuds hopes for a Sunday match-up seemed to vanish.


At that point, Centennial called a time-out after a Moorhead penalty.  Centennial then pulled their goaltender thinking they would get back into to game with a 6-on-4 situation.  After Moorhead gained control of the puck, the Spuds goalie headed towards the bench and we had a once-in-a-lifetime situation with both team's goalies pulled.


The fans on both sides of the arena were stunned and confused.


Moorhead scored an empty net, shorthanded goal to take the 6-2 lead with under 2:00 to play in the game.  It was at that point Centennial figured to simply keep their goaltender in the game.  Under a minute to play, Moorhead scored two more tallies with the final goal coming at :04 left in the contest and advanced to the final round on Sunday afternoon.


What seemed impossible, and improbable, became reality in front of stunned parents and fans at the East Grand Forks Civic Center.

What an exciting Game and Tournament!