2010 MINNESOTA STATE CLASS "A" HOCKEY TOURNAMENT: Warroad Rolls Into Semis .. With Brock and Brett, no reason to fret. There certainly wasn’t for the Warroad Warriors Wednesday night in the closing game of the first round of the Minnesota Class A state boys hockey tournament .. Courtesy of Grand Forks Herald 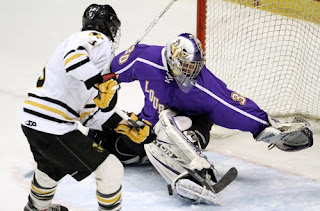 ST. PAUL — With Brock and Brett, no reason to fret.

There certainly wasn’t for the Warroad Warriors Wednesday night in the closing game of the first round of the Minnesota Class A state boys hockey tournament.

Hebel had the hat trick and added three assists for a six-point game, pushing his season goal total to 29.

Nelson had the game’s first goal on the first shot of the game and added a shorthanded goal in the final period for good measure. He also collected four assists as the Warriors overpowered Lourdes behind the dazzling play of the top line of Hebel, Nelson and Tanner Pederson, who had two goals himself.

Nelson, a finalist for the Mr. Hockey Award to be given out here Sunday to the top senior player in the state, didn’t take long to cast a vote for himself.

Just 2:37 into the first period, Nelson put the Warriors on the board with his 48th goal of the season.

He took a pass off the left wall from defenseman Carson Gray, cut across the crease and undressed Lourdes goalie Nick Heimer to slip a backhander past him.

It was just a continuation of Nelson’s sizzling scoring from the Section 8 tournament, where he had eight goals in three games.

Warroad’s Aaron Rasmusson made it 2-0 on Warroad’s fourth shot of the opening period.

Rasmusson, coming down right wing, fired from what seemed to be an impossible angle from the lower outer edge of the faceoff circle. Somehow his shot snuck past Heimer’s left shoulder when he failed to close off the short side on Rasmusson.

The goal was the 13th of the season for Rasmusson, a senior who centers Warroad’s second line.

Nelson could have had a hat trick in the first period, in which the Warriors outshot Lourdes 8-2.

He was stoned by Heimer on a shorthanded breakaway with five minutes left in the period. Nelson tried to go 5-hole on Heimer, but was denied.

In the last minute of the period, Nelson came in alone on Heimer from left wing and tried the same move while cutting across the face of the crease that netted him his first goal.

This time, though, the puck slid harmlessly off Nelson’s stick and skittered into the corner before he could even get a shot off.

It was a dominating opening period for the Warriors, who entered the tournament ranked fourth in the state and were making their fourth straight appearance at state and 21st all.

Warroad limited Lourdes to two shots on goal in the opening period despite the Eagles having a pair of power plays.

Lourdes, ranked 15th in the state in the final poll, were making their second straight trip to the state tournament.

It got even worse for Lourdes in the second period in which Hebel scored on a slap shot from the right point at 4:28 to get the Warriors rolling again.

A tremendous hustle play by Nelson set up linemate Tanner Pederson for Warroad’s fourth goal and just the third of the season for Pederson.

Nelson chased down a puck headed for an icing call on Warroad, and in one motion, flipped it out front to Pederson for an easy tap-in.

Hebel scored his second of the game and 23rd of the season on a feed from Nelson at 12:48 of the second period for a commanding 5-0 lead going into the final period.

Goals by Adam Shaugabay, Hebel, Nelson and Pederson in the third period closed out the beatdown by the Warriors.

Warroad sophomore goalie Andy Foster wasn’t tested much, but he was solid in posting his second straight shutout of tournament play.

He finished with 18 saves to go with his shutout of Thief River Falls in the Section 8 finals last week.
Posted by Oshie-Blogs at 9:59 AM

They'll need more than one line against Breck! Can't wait to watch this one!!!

just wanted to say that i love the blog...cant wait to see gothberg in a force/und uniform.