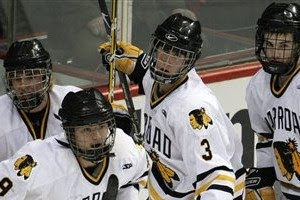 Eden Prairie retains its top spot in the rankings, although No. 2 Minnetonka sure crept closer with its performance over the Thanksgiving weekend. But the defending Class AA state champions certainly did nothing to lose their ranking -- quite literally.

The Eagles will miss Mr. Hockey winner Nick Leddy on the blue line, but return much of the lineup that led them to the state title last winter. Last year’s precocious sophomore class is now an experienced junior unit that is ready to take the reins.

The Eagles have firepower on the front line with junior Kyle Rau and seniors Mitch Rogge and Mike Erickson leading the way. Defensively, junior Dan Molenaar will be counted on to help compensate for Leddy’s loss. He’s certainly capable of big things and will be helped by the return of junior goaltender Andrew Ford, the unsung hero of last year’s state tournament run. Ford started all three state games while allowing just four goals. And don’t forget about senior goaltender Matt Halloran, who split time during the regular season and won 12 games.

The Skippers closed the gap on top-ranked Eden Prairie to a negligible amount with their performance at the Woodbury Tournament, when they routed perennial powers Duluth Marshall and Woodbury by a combined 15-1 score. In fact, Minnetonka was seriously considered as a co-No. 1 for the poll.

The Skippers are loaded with Division I college prospects in defensemen Andrew Prochno (2-7-9), Justin Holl (1-2-3) and Troy Hesketh and forward Max Gardiner (3-5-8), all of whom have already committed to big-time programs. Hesketh was also drafted in the third round of the NHL entry draft by Edmonton.
Thomas Schutt (4-0-4) is a sniper who compliments Gardiner well on the top line, while goaltender Jim Kruger (2-0-0, 0.50) faces few shots, but stops nearly every one (.966 save percentage). Kruger is an experienced anchor in nets, having started the past three years. It’s tough to pick out a weakness for the Skippers – just ask Marshall and Woodbury.
This week: Friday at Hibbing (7:30 p.m.), Saturday at Virginia (3:15 p.m.)

Jefferson kicked off a new campaign with a 7-1 victory over Rosemount, getting balanced scoring up and down the lineup. That’s a hallmark for coach Jeff Linquist’s team, which has a host of talented players with Division I potential. Ryan Siiro led the offensive outburst with two goals as the Jaguars ripped 59 shots on net. It won’t be the last time Jefferson posts that many shots, as in addition to a strong group of forwards, the Jaguars have offensive-minded defensemen such as Princeton-bound Joe Faust, Jeff Pauluk and Jake Perpich.

Justin Woodley (1-0-0, 1.00) took over in nets for graduated Brimsek Award winner Casey O’Connor and stopped nine of 10 shots. He’ll likely see more action as the season progresses, but it was a solid start in one of the few areas of inexperience for the Jaguars.

Breck begins its title defense with a strong road test at highly-regarded Mahtomedi this Tuesday. The Mustangs have lost to Mahtomedi four straight times over the past three seasons, although Breck hasn’t had a returning team quite this deep and talented during that stretch.

The Cadets will likely start their season angry, as they missed the state tournament for the first time in four years last winter. They’ll also be hungry, as their first game isn’t until the following week, well after most programs have begun their seasons.

Expect St. Thomas Academy to get off and running quite quickly, as the Cadets have as much returning talent as anyone in the state along with Breck.

This week: no games scheduled

It may be that Benilde-St. Margaret’s is one of the top-five teams in Class AA this winter and yet never get a sniff of the state tournament. Such is the life in Section 6AA for Ken Pauly’s team, which has to contend with No. 1 Eden Prairie and No. 2 Minnetonka, as well as rising power Wayzata. The Red Knights will face as tough a test in the sections as any tournament in which they could participate.
Benilde was young last year, but still won 21 games and challenged Eden Prairie in the section semifinals.

Now, with another year of experience, they’ll be even tougher.

Christian Horn is arguably the top sophomore sniper in the state and set a school record for goals by a freshman last winter. Brett Patterson is a great two-way forward and Will Nelson and Pat Steinhauser make for a formidable offensive unit. Defensively, the Red Knights are also strong in front of goaltender Jacob Meyers.

Hill-Murray opened with a 5-2 victory over Burnsville, with David Bruchu netting a pair of third-period goals to seal the win. It was a good start for the Pioneers as they attempt to put last season’s tumult behind them. Despite dismissing several key players at midseason, coach Bill Lechner still led the young Pioneers to the state tournament, showing their talent and resilience.

Hill-Murray should be one of the strongest defensive teams in the state paced by seniors Chris Casto and Jordan Johnson and juniors J.D. Cotroneo and Kevin Schulze and uber freshman Zach LaValle in front of junior netminder Tim Shaughnessy. The offense may not have a true sniper like graduated Tyler Zepeda, but the forwards form a solid, hard-working group led by Ben Bahe, Jack Walsh, Kevin Becker and Willie Faust.

Blaine makes a big trek up to the northwest corner of the state to kick off its season, visiting Roseau in a classic Metro-Outstate battle Friday night. The Bengals have won the past for Section 6AA titles and look primed to do so again.

Mr. Hockey candidate Nick Bjugstad accelerated his schooling to graduate a year early and move on to the University of Minnesota, so he is actually a senior this year. Bjugstad, an honorable mention All-State pick, just might be a first-round NHL draft pick this coming summer, as he has everything scouts are looking for: skills, size, toughness and leadership.

With Bjugstad jumping up a class, Blaine is loaded with senior leaders all over the ice – wingers Eric Scheid and Gavin Tufte, defensemen Tony Larson and Taylor Richart and goaltender Danny Harper.

How tough is it for Stars’ fans to wait for the season’s start? While virtually everyone will have at least one game (and some as many as five) under their belts by the middle of next week, Holy Angels doesn’t have its opener until Friday, Dec. 11.

The Stars haven’t been to the state tournament since winning the title in 2005, quite a dry spell for the hockey superpower. They’ve lost Mr. Hockey candidate Danny Mattson, but return a trio of Reilly brothers that should make the transition smooth.

Senior twins Connor Reilly and Ryan Reilly combined for 44 goals last year and both have committed to the University of Minnesota. Sophomore defenseman Mike Reilly earned All-Missota honors as a freshman and complements his brothers well. None are physically imposing, but they certainly know how to play the game.

This week: no games scheduled

Warroad proved it should always to be considered an annual state contender last winter when it romped through much of the season behind a new crop of stars.

The Warriors didn’t slow down until the Class A state title game last year, when they ran into John Russell and Breck. The great season was a bit of a surprise, as the Warriors graduated much of their scoring punch from the previous season and didn’t have an experienced varsity goaltender on their roster. But it didn’t slow them down one bit.

It may be more of the same this winter, although All-State forwards Brock Nelson (45-36-81) and Brett Hebel (22-36-58) and defenseman Carson Gray (6-22-28) are a great trio of veterans. But again, Warroad must replace many top players, as well as All-State goaltender Jason Goldsmith.