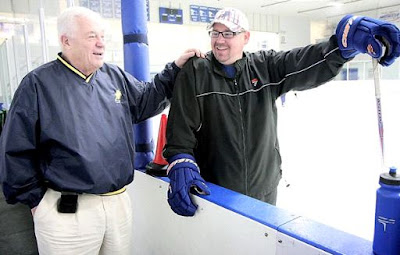 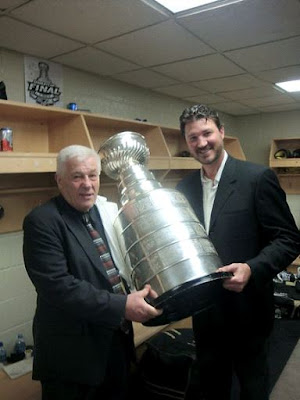 A Dream, a Pillow and a Stanley Cup ... Penguins let Chuck Grillo achieve his goal

Chuck Grillo didn't jump from his seat, he didn't high five those sitting around him, he didn't yell. As Grillo watched the arena's clock strike zero - and signify the fulfillment of his life's dream - his mind wandered.He thought of his father, Dominic, who worked in the mines for 42 years and never missed a day of work. The father who worked overtime to buy Chuck his first pair of skates. They cost $19. He thought of the high school teams that he coached in Bemidji and his family (wife, Clairene, their six children and 11 grandchildren and 1 great grandchild) and everyone who had given him an opportunity over the years.

Clairene is one who has always empowered Chuck to live his life and for that he is eternally grateful.

He thought of his mother Doris, who had recently been put in assisted living. In his mind's eye, Chuck could see her tears. He was crying, too.When the buzzer sounded, he'd finally captured what had evaded him for nearly 70 years.Penguins 2, Red Wings 1. Chuck Grillo was part of a Stanley Cup championship. Grillo, an amateur scout for the Penguins and owner of Minnesota Hockey Camps in Nisswa, has had a singular obsession while working in the NHL for the last three decades.The drive may at times have manifested itself as neurotic, such as the time in the late '80s when he refused to touch or take a picture with the Stanley Cup when Phil Esposito brought it to the New York Rangers training camp. When Esposito asked Grillo why, the scout said he would wait until the team had won it.

Grillo frequently talked with longtime friend Herb Brooks about the Holy Grail and how he was going to stay in the game until he was part of a championship. He always told his wife, Clairene, that he would be a Stanley Cup winner before he turned 70. And so he was. Grillo's 70th birthday is on July 24, 2009."I've been chasing that thing for 30 years," Grillo said. "You dream about it all your life. I've been on the ice since I was three years old. You dream about winning the Cup a lot on the ice outdoors. "And so here is Grillo, sitting in Joe Louis Arena in Detroit. It's June 12; Game Seven of the Stanley Cup Finals. The young Penguins are a prohibitive underdog against the mighty Red Wings."One hundred out of one hundred people working in the game would have picked Detroit in the final game," Grillo said.

He's getting text messages from his young grandchildren Sophia and Monique: "Malkin for President!" one says. Another says: "Talbot shelved that like a librarian, Grandpa!"Pittsburgh held on for a tight - but convincing - 2-1 victory. Grillo, subdued and pensive, responded to each one of the congratulatory text messages in his inbox. Then he got up from his seat and moved downstairs to get on the ice."You see those eight, nine, 10 kids that you played a role in them being drafted, and you look in their eyes, you look at their families, it's special," Grillo said.He went to the locker room. Experienced the mania. It was loud and champagne was flying.

"I wasn't going to have any alcohol or anything like that to ruin the experience," Grillo said. "No champagne or anything like that. I wanted to soak it all in. That's what I did. Around 12:15, Mario Lemieux came in the locker room. He decided to hoist the Cup over his head one more time. One person in the room asked if we could take a picture of him. The next thing you know he is still standing with the Cup taking pictures for 30 or 45 minutes. And his wife is waiting patiently in the hallway with a smile; they have a flight to catch home. He didn't care."Chuck had to bend his imbibing rule slightly when he was passed the Cup. It was large and glistening - and filled with Bud Light. He took two gulps from the trophy he'd spent his life chasing. Sweetest drinks of his life. "There were over 200 people drinking out of the Cup and there wasn't anyone in the room worried about swine flu," Grillo said.

Grillo thinks he will get a championship ring, but he isn't exactly sure how that works. He says he'd trade a ring to have his name engraved on the Cup. Grillo's son Dino tells him that there is room for 52 names on the cup - enough space for the coaching staff, front office and scouts."I'd like to believe that I've done enough to earn that. But that's not my decision," Grillo said. Chuck and his family built the Greenhaven outdoor rink in Hibbing in 1954. If he's allowed to have the Cup for a day or two, that's where he's headed with it."Just to sit with it," Grillo said. "There are too many memories there."

Grillo says the life of a scout isn't glamorous. It's not until the exposition that you realize how right he is.He attended 341 hockey games in the past year (a "scouting year" in hockey is from July 1 to June 30). Last year he went to 376 and had a personal-record 42-day scouting trip. Before that, the most games he had ever attended in a season was 311. He got into a playful banter with former Penguins Chief Scout Greg Malone. Grillo announced that he was going to break his own record. And so, at the age of 68, he averaged more than one game scouted a day.In the last year, he has spent 202 nights in hotels. His scouting trips take him around the United States and Canada but also overseas to Finland, Russia, Sweden, Czech Republic and Slovakia and, less occasionally, Italy, Switzerland, Germany, Japan, Slovenia, Poland and Austria.

Grillo has amassed a ludicrous 1.9 million Marriott points and 1.5 million miles on Northwest Airlines."When I do decide to retire, I'll be traveling free for a while," Grillo says with a laugh.The workdays are long, typically around 16 hours. He is lucky to get two days off a month. And those two days are filled with clerical work, such as typing up reports and making reservations for his next road trip."I wish I had as many brains as I have drive,"

Grillo said.Chuck Grillo was a 40-year-old teacher in Rosemount when he sent handwritten letters to six NHL general managers detailing his interest in a professional scouting career. He got two responses.Lou Nanne of the North Stars wrote to say thank you, but Grillo just didn't have enough experience. But Craig Patrick of the Rangers called. He wanted Grillo to come to New York.Grillo, a teacher of 14 years, met with the school board later and asked for a five-year sabbatical. The board convened and returned with its decision. It was a no and Grillo replied, "You pay me to stand up in front of a room of children and tell them to chase their dreams," Grillo told the board. "If I fail to do that, what kind of coach would I be? You leave me no recourse. I have to do what I've asked kids to do. So I quit."

Grillo would scout for the Rangers for eight years. He moved on to Minnesota, where he served as director of pro scouting from 1988-90 with the North Stars, and then to San Jose, where he moved up to become the executive vice president, director of player personnel for the Sharks from 1995-96. Grillo spent eight years with the Sharks before moving to the Penguins.He has been with the Pittsburgh organization for eight years. It wasn't always easy. Craig Patrick - the man who had started Grillo in the business and subsequently became the Penguins' GM - was relieved of his duties in 2006.

Pittsburgh brought in Ray Shero to lead the show.Shero called Grillo in for a meeting after the 2006 amateur draft in Vancouver. He told the veteran scout that he was free to look around for another job because there were no guarantees that he would be asked back."I will not be looking around," Grillo said pointedly. "I want to be part of this stable for the same reason that you want to be general manager of this stable. Every general manager would love to have your job. You are starting with a stable that has few, if any, equals in the NHL. I want to be part of this stable winning a Cup."That was all Shero had to hear. And it's the reason that Grillo survived the housecleaning and why he is now Pittsburgh's longest tenured scout.

"There's a bit of a guilt feeling for me," Grillo said. "Because I'm the only scout left. I'm the only scout left that was there to draft the last eight or nine guys in the starting lineup. All of the guys that were with me, they all have jobs. They were good. Yet, I am the guy that gets to enjoy the fruits of their labor."

In his time with the Penguins, Grillo has been part of staffs that have drafted Sydney Crosby, Evgeny Malkin, Jordan Staal, Marc-Andre Fleury, Ryan Whitney, Maxime Talbot, Kristopher Letang, Tyler Kennedy and Alex Goligoski; amongst many others, including Brainerd High School graduate Carl Sneep.

Dominic Grillo died a year and a half ago. Doris Grillo was moved into assisted living during the latter stages of the NHL playoffs. Her house in Hibbing - the house that Chuck grew up in - was sold. Chuck was with the Penguins and couldn't help with the moving, so he told his son Dino to get his childhood bed and various other household items for the Minnesota Hockey Camps dorms. Otherwise they would be given away.

After the Penguins won the Cup, Chuck began ruminating on his life and his childhood. He called his mom in a panic."Mom I made a mistake. I got the bed but I didn't get the pillow.

"The pillow was heavy and uncomfortable and stained from years of use. But it was on this pillow that Chuck Grillo dreamed of winning the Cup when he was a boy."

I would tell every kid: Make sure you keep that pillow you dreamed on," Grillo said.

"Because someday, somewhere, you are going to realize that dream, and it's going to be good to have that pillow. I'd encourage every parent to encourage their kids to think big, dream big. Because when that happens, they can realize theirs."
Posted by Oshie-Blogs at 7:18 AM