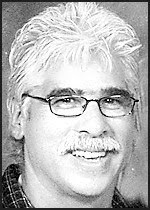 “I said, ‘See you in a couple hours,’ and went home to get something to eat,” Dale Pesch recalled Monday. “Everything seemed good, normal.” But Tim, 52, the baby in a family of eight hard-skating siblings, suffered a massive heart attack at home over the noon hour Saturday and died a short time later.

His East Grand Forks Squirts hockey team was down 4-1 after two periods Saturday morning against the Grand Forks Blues, an all-star team, so Coach Tim Pesch had a few words for his skaters.

“Boy, you guys are missing a heck of a good game,” he said, needling the youngsters about their tepid performance, appealing to their pride.

The team responded, scoring three goals to tie the game, then another a minute into overtime to win it. They celebrated briefly, but they had another game scheduled at 3 p.m.

In the coaches’ box, Dale Pesch talked briefly with Tim, his younger brother and fellow coach, about drills they wanted to work on after the weekend games.

“I said, ‘See you in a couple hours,’ and went home to get something to eat,” Dale Pesch recalled Monday. “Everything seemed good, normal.”

But Tim, 52, the baby in a family of eight hard-skating siblings, suffered a massive heart attack at home over the noon hour Saturday and died a short time later.

At the hospital, the family conferred, and Dale made the call: The kids would play the afternoon game.

They weren’t told about Coach Tim’s death until after the game.

Tim Pesch was a standout hockey player at East Grand Forks Senior High, graduating in 1976. He was drafted by the St. Louis Blues and played in Canada until injuries forced him to think about another career.

An accomplished stone and brick mason, he stayed with hockey as a coach at various levels, hoping to develop some future stars. He and friends from high school regularly gathered for a pickup game.

“He was a pretty good hockey player in his day,” his brother said. “Hockey has always been important in our family.”

Tim was “the baby of the family, so this was such a jolt,” Dale said. “We didn’t expect it, though (heart disease) does run in the family. … Three uncles on our mother’s side didn’t make it to 55.”

Tim had coached the Squirts for four years, and Dale joined him this year. “He took care of the forwards, and I took care of defense,” Dale said.

“He was normal during the morning game Saturday. He didn’t say anything or act any differently. When he went home, Lori, his wife, was a little late coming home. She called him and asked if she should pick up something for dinner, but he said he was already making something.”

Lori was blocks from home when she called.

“When she got there, he was coming up the basement steps, and he couldn’t breathe,” Dale said. A 911 call brought medical technicians, who were able to get a faint pulse before racing Tim to the hospital. He was declared dead after further attempts to revive him.

His loss would be hard at any time, his brother said, but it’s especially difficult for the family as Christmas approaches.

“And his daughter just had a baby girl,” he said. “He was a grandpa for the first time.”

From his players, a pair of salutes

Tim and Dale had talked at a Friday night practice and again after the Saturday morning game about working on face-offs. They talked about getting former East Grand Forks and UND hockey player Donny Riendeau, a nephew, to help out.

“It was really something, how those kids came out for the third period Saturday morning and tied the game, then won it in overtime,” Dale said. “It was the first time they ever beat the Blues. They didn’t quit.”

Like others in the family, Tim approached the ice with intensity, “but he usually kept his cool pretty good. He always was a considerate guy, a guy who’d do anything for you — especially the kids we’re coaching now.”

After Dale made the decision to play the afternoon game against Moorhead, he asked a friend to take over the coaching duties.

“Tim would want them to play,” he said.

“The kids didn’t know that Tim had died. I got there late in the third period, and the kids and all the parents got together in the locker room.

“It was terrible. There was a lot of crying — kids and parents, too.”

The Squirts lost the Saturday afternoon game, but Sunday — after stepping onto the ice to form a circle and slap sticks in a UND Sioux-like tribute to their late coach — they cruised to a win over West Fargo.

And on Wednesday, at Tim Pesch’s funeral at Sacred Heart Catholic Church in East Grand Forks, his young skaters, 9 and 10 years old, will assemble again in their game jerseys to serve as honorary pallbearers.
Posted by Oshie-Blogs at 7:46 AM