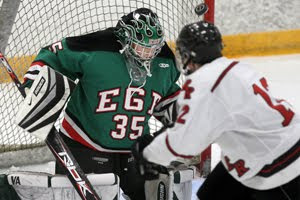 For the most part, the Grand Forks Red River boys hockey team is inexperienced.

The duo combined for nine points and had a hand in five goals as the Roughriders pulled away for a 7-4 victory over the Green Wave at Purpur Arena.

“Those guys work so well together,” Red River coach Bill Chase said. “When they get things going, they’re fun to watch. It’s early in the season, but the chemistry is already starting to develop. They already understand where the other is going to be.”

LaDouceur, a senior who led the state in scoring a year ago, had two goals and three assists. Fugleberg, a sophomore who had 13 goals for Red River’s state championship team last season, added two goals and two assists.

“We have a young team … just five seniors,” LaDouceur said. “But guys are going to have to step up into roles. We can’t have guys playing like it’s their first year. They have to play like it’s their second or third year. When that happens, we’ll start clicking.”

The Riders were clicking early with three quick goals in the first period. Red River defenseman Taylor Steen scored his first career goal at 5 minutes, 49 seconds of the opening period on a rebound after a LaDouceur shot.

LaDouceur followed with two straight goals, including an impressive backhand flip from the slot while skating shorthanded.

But the Green Wave, who lost to Bemidji 10-1 to open the season, battled back.

Before the end of the first period, Senior High sophomore Zack Lawdermilt scored two goals and teammate Tucker Poolman also had a tally. The Riders, who also received a goal from Josh Heisz in the first period, led 4-3 after the opening period.

“I thought that when Red River scored those early goals, we responded well,” Senior High coach Cory Chupka said. “In the second period, we continued to play hard but we need to tighten up in the defensive zone. We have to play the lanes and get sticks on pucks.”

The Riders bumped their lead to 6-3 in the second period after a pair of goals by Fugleberg, whose first goal came from behind the net when a centering attempt hit off the skates of Senior High goalie Beau Scheving. LaDouceur and linemate Josh Gilbertson assisted on both plays.

Senior High’s Jake Useldinger and Red River’s Brock Dahl scored in the third period as the Roughriders improved to 2-0.

Chase, who is in his first year as head coach after Matt Malm resigned after last season, said the Riders need to stay away from these kinds of high-scoring games.

“I think the guys were excited to play in front of their friends and family, but I think they were too excited,” Chase said. “That’s when the sloppiness creeps in. We don’t want to have shootouts. Our offense isn’t going to be there every night.”
Posted by Oshie-Blogs at 8:45 AM

I love your site! Do you know of any other good sources for h.s. hockey news in northern Minnesota?

I'd like to link to them on my 'labor of love'; hockeybias.com!

I appreciate the kind comments .. a labor of love .. promoting young aspiring athletes is my business .. go to my good friend, Doug's site, at www.followthepuck.com .. he has many links to other sites in Northern MN plus his site is unreal and very informative .. Doug is one class act ..