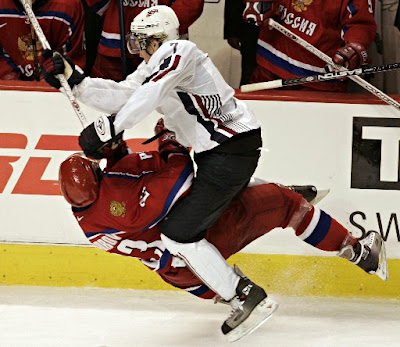 By Jack McCarthy
Special to USAHockey.com

Warroad, Minn., may not be very large, yet it carries an outsized representation in U.S. Olympic hockey circles.

Home to 1,700 people and perched on the southwest shoreline of Lake of the Woods in northern Minnesota, Warroad is home to three Olympic goal medal winners and at least five more who represented the United States on the ice.

And 22-year-old St. Louis Blues center T.J. Oshie hopes to become the latest on the list.

“There are a lot of Olympians from Warroad and they talked to me about it and told me I’d be there some day,” said Oshie, who won two Class A state championships while at Warroad High School. “Henry Boucha, he’s my cousin, he talked to me quite a bit about it and showed me his [1972] silver medal and that was pretty special.”

Warroad also is home to 1960 gold medal winners Bill Christian and brother, Roger. Bill’s son, Dave, was a member of the 1980 Miracle on Ice gold medalists. The Christian family also manufactured hockey sticks of the same name in Warroad for 35 years. The town secured its first female Olympian last week when Warroad native Gigi Marvin was named to the U.S. women’s Olympic team.

Oshie has experienced a whirlwind 16 months as he jumped from college (University of North Dakota) to the pros (St. Louis Blues) and now stands poised to represent his country at the 2010 Vancouver Olympics.

“It’s unbelievable. I never thought I’d be here, especially at this age, but I’m very proud,” said Oshie, who skated with 19 other forward prospects at the Team USA orientation camp in suburban Chicago during August. “It’s surprising with all the caliber of players here, but everyone is bonding very well and everyone gets along.”

Oshie is coming off a successful, if slightly abbreviated rookie season with the Blues.

Hampered by an ankle injury early in 2008-09, he went on to appear in 57 regular season games and made increasingly bigger contributions as the season progressed.

A popular YouTube video featured Oshie’s punishing, but clean hits on Columbus winger Rick Nash last March. And he’s so popular with Blues fans that his No. 74 jersey is a top-seller, reportedly three-times better than his closest teammate.

He frequently updates a Twitter page and said prior to the orientation camp that he “hoped to make Blues fans proud.” And his Facebook page has nearly 2,800 followers. It includes a 2005 clip from Oshie’s high school days when he won a faceoff, then earned an assist on a game-winning goal in the Minnesota state championship game.

Shortly thereafter, the centerman was the Blues’ top pick (24th overall) in the 2005 NHL Entry Draft.

But pro play was put on hold as Oshie opted for a college career at North Dakota. He put in three seasons and 129 games for the Fighting Sioux, collecting 59 career goals and 83 assists for 142 points. North Dakota reached the NCAA Frozen Four three straight times with Oshie on board.

He also has two previous associations with Team USA, including seven games in the 2006 World Junior Championships, where he had one goal.

Earlier this year, he played nine games in the Men’s World Championships, picking up one goal and a pair of assists.

“It’s great. I love the guys to death and we’re all good friends,” Oshie said. “There’s a lot of good friendships and we only get to hang out at these events, so it’s fun.”

And he’d like nothing better than to renew some of those summertime camp acquaintances in Vancouver.