Colossal Match-Up Tonight In Section 8A .. TRF (#7) Journey's To Warroad (#3) In A Clash Of The Titans..Nelson/Hebel & Co. Host The Zane Gothberg Show 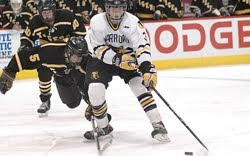 Section 8 has always generated the great match-ups throughout its existance. The major upsets, the stroll up and down, west to east on Minnesota State Highway's 34, 11, 3, 200, 2, and weathering the vicious NW Minnesota storms and blizzards.

Tonight, that tradition continues as the Thief River Falls Prowlers make the 88-mile trek to the friendly confines of the mystical, Gardens Arena in Warroad.

The Warriors are off to a fast 5-1-0 start with the only blemish to a revitalized Grand Rapids Thunderbirds program.

Warroad has made the trip south in March in 11 of the past 16 state tournaments, winning titles in 1994, 1996, 2003 and 2005. The only two other programs to capture Section 8A titles since the Class AA / A system came into effect in the 1993-94 season is East Grand Forks (1998, '99, 2001, '02) and Thief River Falls (2006). And again, despite losing excellent talent to graduation, it would be difficult not to consider the Warriors the favorites in Section 8A. There are holes to fill, however, including scoring depth behind that top line.

They are led by the dynamic scoring duo of Brett Hebel (9+9=18) and Brock Nelson (11+9=20). Junior Nick Stoskopf (4+5+9)rounds out one of most dangerous lines in Minnesota hockey. That line has accounted for 24 of the team’s 33 goals, while All-State defenseman Carson Gray (2+7=9) and blueliner Joey Olson (1+7=8) are the only other players with more than four points.

Those five were the main returning veterans for the Warriors, who also had to replace All-State honorable mention goaltender Jason Goldsmith. Shawn Storey (5-1-0, 2.00), Goldsmith’s backup last winter, has been solid thus far, with a .886 save percentage.

The Prowler's have been the only team in Section 8A to knock off the Warriors since the 2001-02 season at The Gardens in Warroad. That occurred in the 2006 Section 8A championship game back in late February, 2006. Michael Forney's heroic, overtime rebound goal in the fourth, extra session gave TRF its first Minnesota State H.S. Tournament bid since 1965.

Senior goaltender, Zane Gothberg, is widely considered the best in Minnesota hockey. Gothberg is a (A) rated goaltender in the NHL's Central Scouting Mid-Season list (Brock Nelson is also an "A" rater skater) for the 2010 NHL Entry Draft later next summer. Both Gothberg and Nelson have committed to the University of North Dakota Fighting Sioux Men's hockey program.

Will Section 8A have two representatives in mid-March at the Minutemen's "Minnesota Mr. Hockey" banquet?

The Prowlers are paced Mathew Lindquist and Micah Ranum each with 5 goals apiece with Ryan Crosson and Brady Johnson 3 goals.

So, tune in to exciting Section 8A action tonight as #3 Warroad hosts #7 Thief River Falls at The Gardens Arena in Warroad for a 7:30 PM tilt.

Warroad bounced back nicely after losing their first game of the year against Grand Rapids the week before. The Warriors took care of Bemidji 6-3 in Bemidji last Tuesday night.

The Prowlers only loss this season has been to Roseau in their very first game. Since giving up six goals to the Rams, senior goaltender Zane Gothberg and Thief River Falls have given up eight goals in six games.

I'm not quite sold on their ability to score goals but University of North Dakota recruit Zane Gothberg should be able to give them a chance to win every game. They will have their hands full against Brock Nelson, Brett Hebel, and the Warriors on Tuesday night.

The game is being broadcasted on both radio stations. KTRF (1230 AM) in Thief River Falls and KQ-92.5 in Warroad. The Minnesota Sports Broadcasting Network is also airing the game via webcast at http://www.mnsportsnetwork.com/.
Posted by Oshie-Blogs at 12:29 PM