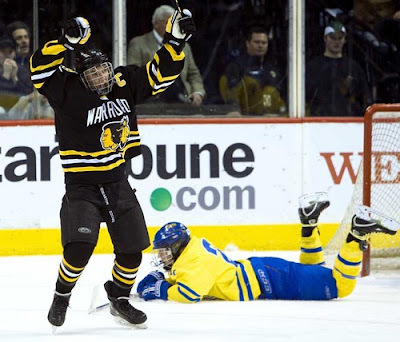 Warroad's Dane Shaugabay celebrates his first of two goals in front of St. Cloud Cathedral's Nate Schmidt (on ice) Friday afternoon at the XCel Energy Center in St. Paul. The goal put the Warriors up 1-0 in the first period. Photo by Derek Montgomery.

Dane Shaugabay had two goals to lead third-seeded Warroad into the Class A championship game with a 5-3 victory against St. Cloud Cathedral. Warroad will meet Breck in the final.

ST. PAUL – Warroad coaches picked up a tip drill while watching the NHL’s Minnesota Wild do one in October in the Xcel Energy Center.

“It’s something we saw the Wild do in practice and took it home with us,” Warroad coach Albert Hasbargen said.

The practice paid off right back here in St. Paul on Friday, as Brett Hebel’s tip-in goal was the game-winner in the Warriors’ 5-3 victory against St. Cloud Cathedral in the state Class A semifinal in the Xcel Energy Center.

Hebel deflected defenseman Michael Pieper’s shot past goalie Nick Maiers at 9 minutes, 7 seconds of the third period to give the Warriors a 4-3 lead. The goal came just 34 seconds after Cathedral had evened the score.

Dane Shaugabay added an empty-net goal with 32 seconds to play to send the Warriors to the championship game for the first time since they won the program’s fourth state title in 2005.

Warroad (28-2) meets Breck (26-3-1), which defeated previously unbeaten Little Falls in the other semifinal, at noon Saturday in the Xcel Energy Center.

Shaugabay’s second goal of the game capped a wild third period of back and fourth scoring between two defensive-minded teams.

“We like great defensive hockey,” Hasbargen said. “We like guys keeping their gaps tight all over the rink, wherever it is. We don’t like getting scored on.”

When the Warriors do get scored on, they’re always on guard. The same holds true when they score.

“We preach that,” Hasbargen said. “When we come down here it just seems like goals are scored in bunches. We tell them all the time you have to concentrate on that next shift after a goal is scored, whether it’s on our team or whether we score.”

Warroad found itself in a bit of a shootout in the third.

After Chris Sylvester scored at 7:15 of the period on a tip of a Micky Knox pass to make it 3-2 Warroad, Cathedral answered just 1:18 later. Alex Koopmeiners put a shot past Warroad goalie Jason Goldsmith after a pass from Kyle Kudak.

Hebel, who added two assists, then answered the Koopmeiners goal to give Warroad the lead for good. Pieper started the play to earn his third assist of the game.

“We score like that a lot,” Hebel said of his tip shot. “I always tell coach on the bench, ‘It’s the Wild tip drill.’ ”

The teams entered the third period tied at 2. Shaugabay scored on a rebound in the first for Warroad and Jon Larkin answered at 4:47 of the second for Cathedral. Brock Nelson made it 2-1 Warroad on a rebound of a Hebel shot at 10:51 of the second, but Cathedral’s Joe Nessler scored just 22 seconds later.

“That first period kind of came back to kill us,” Cathedral coach Eric Johnson said.

Things were different when Cathedral defeated Warroad 4-2 on Jan. 2 in St. Cloud.

The difference in the rematch?

“We got the bounces in January and they got them in March,” Johnson said.

Hasbargen was concerned about Cathedral’s ability to connect on long passes from its defenseman. The Crusaders scored on a long pass to take a lead in the first minute in the first meeting between the teams.

“We were ready for it, and our kids executed it very well,” Hasbargen said of Warroad’s defense in the rematch. “Our defensemen did an excellent job of keeping those yellow jerseys in front of them.”

As a result, the Warriors have a shot at a state title Saturday.

Hasbargen was impressed by Breck after watching it defeat Little Falls 6-1 later in the day.

“We’re going to have to play our best game ever,” he said.
Posted by Oshie-Blogs at 8:20 AM