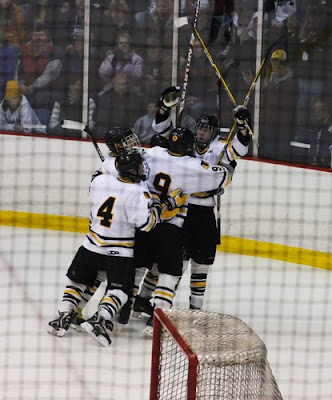 Brock Nelson’s goal with 1 minute, 53 seconds remaining lifted Warroad to a 3-2 victory over Thief River Falls on Thursday night in the Minnesota Section 8A boys hockey championship in The Gardens.

WARROAD, Minn. — Thief River Falls had an answer for just about every goal Warroad put on the board.

But the Warriors — as usual —kept their cool, stuck to the game plan and it paid off.

Brock Nelson’s goal with 1 minute, 53 seconds remaining lifted Warroad to a 3-2 victory over Thief River Falls on Thursday night in the Minnesota Section 8A boys hockey championship in The Gardens.

“The third goal really did it for us,” Warroad senior defenseman Michael Pieper said. “After that, it was just defense. We really like to take care of our zone. We know that if we can get up and win in our zone, then we can win the game.”

It is Warroad’s third straight section championship and, of course, its third trip to the state tournament.

The Warriors will play on Wednesday against an opponent to be named in St. Paul.

Warroad took a 1-0 lead in the first period when a Pieper shot deflected off Brett Hebel and past Thief River Falls goalie Zane Gothberg (19 saves).

The Prowlers answered with Kent Peterson’s tally with 2.2 seconds left in the first.

“I thought we controlled the first period pretty dramatically,” Pieper said. “When they scored with a couple of seconds left, that kind of hurt. But we came out in the second, they tied it up again and we kept playing.

“We know we’ve got enough offensive power and defensive support with our goalie. We’re not going to lose our cool. We’re going to play our game and know that our game’s better than the rest.”

Nick Stoskopf scored the lone goal of the second period, as he took a shot from the point that Gothberg appeared to have under control. A second later, the puck trickled in behind the goalie for a 2-1 Warroad lead.

“It was a good defensive battle, but we got some lucky bounces tonight,” Warroad coach Albert Hasbargen said. “Typically we get some pretty goals. . . . we just got some bounces and ended up on top.”

Thief River Falls knotted it at 2 when Warroad goalie Jason Goldsmith (16 saves) left a rebound out front and Brady Johnson was there to knock it in.

“We didn’t get too frustrated when they tied it up every time,” Pieper said.

Nelson notched the third tally for Warroad on an assist from Dane Shaugabay. Shaugabay, with the puck, weaved through a crowd of players in front of the net and took a shot that bounced off Gothberg’s left pad. Nelson was there at the left post to score his 41st goal of the season.

The coach missed the game-winner.

“I was talking to some players on the bench and really didn’t see the score,” he said. “I looked at the clock and saw how short time was getting. . . . I actually thought (Dane Shaugabay) had scored it.”

Warroad (26-2) will have a chance at its first state title since 2005 when the tournament begins in the Xcel Energy Center.

“Coach says it’s a lot more fun when you win it,” Pieper said of state. “And they’ve been there; they have that experience.”
Posted by Oshie-Blogs at 11:06 PM