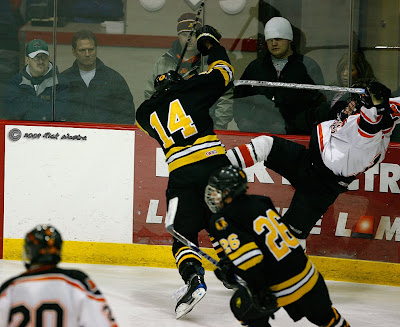 They’re called the gold line because of the color of their practice jerseys. The nickname seems appropriate, the way these three forwards have been golden for the Warroad boys hockey team this season.

By: Kevin Fee
They’re called the gold line because of the color of their practice jerseys.
The nickname seems appropriate, the way these three forwards have been golden for the Warroad boys hockey team this season.
Senior Dane Shaugabay and juniors Brock Nelson and Brett Hebel have put up numbers for one line that haven’t been seen in the hockey tradition-rich Warroad in some time.
They have a combined 180 points in 28 games, an average of 6.4 per game, entering the Minnesota state Class A hockey tournament. Warroad (26-2) meets Hutchinson (19-7-1) at 1 p.m. Wednesday in the quarterfinals in the Xcel Energy Center in St. Paul.
Dennis Fermoyle, a Warrior assistant coach this season who has been around the program for 20 years, says the Nelson line might be the best he’s seen in Warroad.
“When they’ve got things going, they are very good,” Fermoyle said. “We’ve had some good lines, but I think that’s the best line we’ve had.”
Nelson, a grandson of U.S. Hockey Hall of Famer Billy Christian, is the leader of the group. Nelson, a crafty center, has 41 goals and 33 assists for 74 points.
Shaugabay has put up 22 goals and 32 assists for 54 points. And Hebel has 20 goals and 32 assists for 52 points.
Here’s what Warroad coach Albert Hasbargen has to say about the three:
On Nelson: “He’s got God’s gift with his hands. He’s just a natural goal-scorer. He’s fun to watch out here. . . . You can tell he’s not a first-generation hockey player. He just knows the game.”
On Shaugabay: “He has a good shot and complements the other two. . . . He’s pretty foxy around the net as far as finding the twine.”
On Hebel: “He’s a physical player who gets in front of the net and is hard to move, likes to screen the goalie. And he’s real tough along the wall.”
The three aren’t the only difference-makers for the Warriors, of course.
The team has received solid play from goalie Jason Goldsmith, several defensemen, including veterans Michael Pieper and Tai Larson, and a second forward line of Chris Sylvester, Micky Knox and Nick Stoskopf.
With little varsity experience, Goldsmith was the question mark entering the season. He’s come through, posting a 25-2 record, a 1.50 goals-against average and a .910 save percentage.
But the gold line is what puts fear in opponents. Hebel can do it in several ways.
“He is the player on our team I’d least like to play against,” Fermoyle said. “He’s a big, strong kid and he plays physical and does it very well. He does it without taking penalties.
“Defensemen do not want to hang on to the puck when he’s coming at them.”
Hebel said: “I go into the corners and grab the puck and give it to Brock and Dane and then go to the net.”
Hasbargen likes the line’s unselfishness and says the three move well north and south on the ice.
“They don’t do a lot of sideways stuff,” he said. “They attack quickly and they get back quickly."
"If I were a coach on the other side of it, I would certainly have to shut down this line to have success against us.”
That will be Hutchinson’s charge Wednesday.