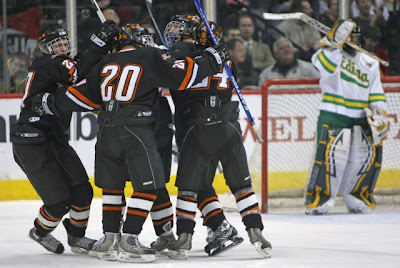 Unseeded Moorhead emphasized winning the first period. Top-seeded Edina might have had its eye on a bigger prize. (Courtesy Of Grand Forks Herald)

ST. PAUL – Unseeded Moorhead emphasized winning the first period. Top-seeded Edina might have had its eye on a bigger prize.

“No. 1 seed, what are you looking at?” Moorhead coach Dave Morinville said. “You’re looking at playing in the championship game. We’re working on winning the first period. That was the key for us. We wanted to make sure we won that first period.”

Moorhead won the first period and carried the momentum to a stunning 5-2 victory against Edina in the Minnesota state Class AA boys hockey quarterfinals Thursday night in the Xcel Energy Center.

More than 16,000 fans watched Moorhead receive two goals each from Trent Johnson and Tyler Larson and 30 saves from Logan Marks en route to a win over a star-laden team led by Mr. Hockey finalists Marshall Everson and Anders Lee.

But the hard- and quick-skating Spuds, a team that lost eight straight games during the regular season and were defeated 3-0 by Edina over the Christmas break, charged into today’s 8 p.m. semifinal.

While the Hornets had some high-flying college recruits with more than 60 points on their roster, the Spuds brought in a more balanced team with a high scorer of 30 points.

“We have some guys who can scoot, plus we’ve got some who work hard and are in shape,” Morinville said. “We’re not going to dazzle you with our brilliance out there. We’re going to work hard and show up and play the game.”

Despite being outshot from the start in the first period, Edina (24-5) took a 1-0 lead at 12 minutes, 16 seconds. Brendan Baker’s shot from the point went through Marks’ pads and into the net on the power play.

The Spuds, who had a 15-8 edge in shots on goal in the first, tied it with a power-play goal with just 43 seconds left in the period. Alex Altenbernd, who returned from mononucleosis this week to provide a lift, slid a pass over to Larson in front of the Edina net. Larson’s shot slid under goalie Johnny Ankeny and just crossed the goal line during a scramble.

Moorhead then scored the two goals in 51 seconds in the second for a 3-1 lead.

Johnson found the puck behind the net, came in and beat Ankeny between the pads at 5:50, just after a Spud power play had expired.

Altenbernd made it 3-1, taking a nice backhand feed from Johnson and putting one in on the glove side of Ankeny on a power play. It was a bang-bang passing play, with Jordan Doschadis starting it off.

Edina pulled to within 3-2 at 3:45 on the third on a power play by Baker before Moorhead went on another spurt.

Johnson scored at 11:46 after Andrew Vandal chipped a pass over to him. Vandal got a rebound of a Kyle Kraemer shot and knocked it over to Johnson.

“I just went to the net,” Johnson said. “Vandal was able to get the rebound and hit it over to me. And I just smacked it home.”

Larson provided the final margin after beating an Edina defender to the puck in back of the net. Larson skated in front and put a wraparound shot to the far side and past Ankeny, stunning the Hornets and their fans, who had thought this group of players might win a state title before they were through.

Instead, unseeded Moorhead still has a chance at its first state title.

And the Spuds received stellar play from Marks in goal in a game that was at its best during a stretch of about 1:30 in the third that featured up-and-down, big-stop-after-big-stop hockey.

“That’s hockey,” Edina coach Curt Giles said. “That’s athletics. That’s sports. It’s that old momentum swing. . . . It’s tough to stop it. You feel like you’ve got a little bit of it stopped and, bang, something bites you again.”

Said Morinville: “What a message to send to our youth programs, that you come out and work hard and good things will happen.”
Posted by Oshie-Blogs at 8:57 AM