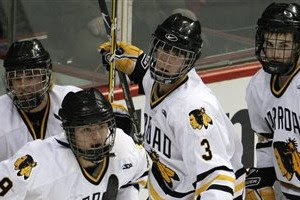 Warroad scored two goals in a span of nine seconds in the second period to break open a close game and cruise to a 7-1 victory against Hutchinson in the state Class A boys hockey quarterfinals Wednesday in the Xcel Energy Center.

ST. PAUL – Everything changed in nine seconds, going from talk of a possible Hutchinson upset to a Warroad rout.

Warroad scored two goals in the second-period spurt to break open a close game – at least on the scoreboard – and cruise to a 7-1 victory against Hutchinson in the state Class A boys hockey quarterfinals Wednesday in the Xcel Energy Center.

Less than two minutes after Hutchinson cut a deficit to 2-1, Brett Hebel and Brock Nelson scored power-play goals in the span of nine seconds to move the Warriors well on their way to the semifinals.

“We pride ourselves on ‘D,’ so we weren’t very happy when they scored that goal,” Nelson said. “We wanted to answer that and put them away. And we did that the next shift.”

Nelson scored three goals and added one assist for the Warriors. Jake Mack added two goals for Warroad, which improved to 27-2. The Warriors had a 35-5 edge in shots on goal, and scored three power-play goals and two shorthanded goals.

“Defensive hockey is played all over the ice,” Warroad coach Albert Hasbargen said. “If you stay on the attack, that limits the other team on their offense.”

Third-seeded Warroad will have a stiffer test in the semifinals, where it meets second-seeded St. Cloud Cathedral (26-2-1) at 11 a.m. Friday. Cathedral defeated the Warriors 4-2 during the regular season.

Hutchinson coach Matt Telecky said Warroad was difficult to penetrate in the quarterfinals.

Warroad led 1-0 after the first period. Nelson scored with a big shot to the short side of goalie Zak Swenson at 12:47.

Mack made it 2-0 Warriors at 3:03 of the second, putting a centering pass from Aaron Storey by Swenson.

Hutchinson’s playoff leader, Riley Bengtson, cut the lead to 2-1 at 10:19 of the middle period with a quick shot after taking a centering pass from Logan Hahn. At that point, the Tigers were 1-for-2 on shot attempts.

That might have provided a wake-up call for the Warriors, who responded with the two quick goals.

Hebel scored at 11:54 on a 5-on-3 power play, beating Swenson with a shot from the circle to the goalie’s right. Then Nelson scored at 12:03, taking a center pass from Dane Shaugabay and sliding one under Swenson.

Hasbargen said the spurt was big for the Warriors.

“When a team scores like that, they start believing in themselves,” he said. “You start squeezing the stick yourself then. Those two goals were just huge. They basically turned the game right around for us.”

Nelson completed his hat trick at 1:54 of the third on a power play.

The final two goals came from unlikely sources in Joey Olson (first career goal) and Mack, who played goalie up until last year.

“I played my junior year at defense,” Mack said. “Now this year they’ve got me playing forward. I do it all. I ref and coach summer hockey, too.”

“They have a nice team,” he said. “They beat us down there, but hopefully our guys come out and play the best game of their lives.”
Posted by Oshie-Blogs at 10:05 AM