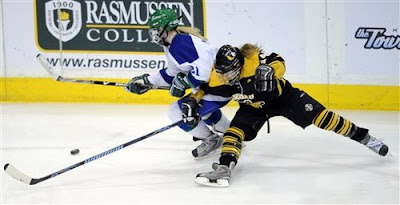 Sophomore Hillary Crowe tapped in the game-winning goal early in the third period, and Blake beat Warroad 4-3 in the Class A girls state hockey championship this afternoon in the Xcel Energy Center.

By: Herald Staff and Wire Reports

ST. PAUL — With three seconds left in the state championship, Blake goalie Chloe Billadeau looked around frantically. After a flurry of shots on net, she was on the ice and knew the puck was somewhere close.

It popped out in the center of the crease, with an open net in front of it, and Billadeau dove on it before a Warroad stick could knock it in.

The manic events capped a crazed final 20 seconds, as the Bears held on for a 4-3 win over Warroad in the Class A girls state hockey championship today in the Xcel Energy Center.

“I remember looking up at the clock and seeing 13 seconds, and it was just ticking so slowly,” Blake coach Brano Stankovsky said. “To hear that buzzer was phenomenal.”

Warroad coach David Marvin said his team got better as the game wore on.

“We had a bad first period,” he said. “We got outshot and outplayed pretty good. I thought we played better in the second but didn’t get a lot of shots.

“Then in the third we were all over them. They got saved by the bell a little bit.”

The top-seeded Bears shut down one of the state’s top offenses for most of the game, holding Warroad to just five shots on goal for the first two periods. Blake led by two in the third, but a pair of Warriors goals 28 seconds apart tied the game.

Megan Brettingen scored at 3:01 and Kayla Gardner at 3:29 for the Warriors.

But sophomore Hillary Crowe scored the game-winner with just over 10 minutes left, pushing in a rebound from deep in the crease. The Bears held off Warroad for most of the period, until the Warriors pulled their goalie with 20 seconds left.

Warroad kept the puck in the Blake zone for the entire 20 seconds, and fired wide on a few shots before a shot ricocheted off a few bodies and ended up behind Billadeau.

“We put some heat on them,” Marvin said. “It was a good hockey game.”

The game ended on a somber note, as sophomore Alyssa Veil lay injured on the ice after the horn sounded. Blake players subdued their celebration to huddle around Veil, who was carried off the ice, but Stankovsky said it was likely just a strain.

Veil, who scored the game’s first goal, twisted her left knee in the scramble around the net in the final seconds.

Warroad was trying to win its first state girls title.

It was the third state title for the top-seeded Bears, who also won in 2003 and 2007. They breezed through the first two games of the tournament, beating New Ulm 9-0 and Mahtomedi 7-0, and outshooting opponents 90-18.

“They’re the best team we played this year, make no mistake about that,” Marvin said.

Marvin said his players went beyond what was expected of them before the season started.

“Once we started beating good teams in November and December, then our expectations really grew,” he said. “It’s tough losing; I don’t like losing. But getting to state and reflecting back, we had an exceptional year.”

And, of Blake, he said: “Maybe we’ll get another crack at them next year.”
Posted by Oshie-Blogs at 1:12 AM