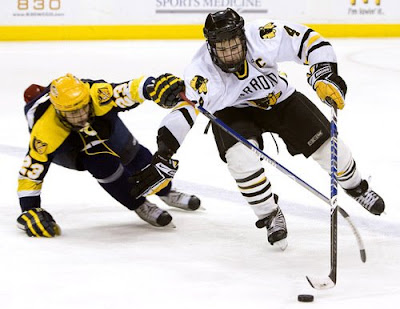 Joe Rehkamp scored one goal and added three assists and John Russell made 33 saves to lead Breck to a 7-3 victory against Warroad in the state Class A boys hockey championship game Saturday in the Xcel Energy Center.

ST. PAUL – The Breck cheering section was chanting his name several times throughout the game.

“That’s the best feeling in the world, kids at school chanting your name, you can’t ask for anything more,” the junior goalie said.

Unless, of course, you lead your team to a state championship.

Russell stopped 33 shots, including 15 in the third period, to spark Breck to a 7-3 victory against Warroad in the state Class A boys hockey title game Saturday before 6,038 fans in the Xcel Energy Center.

The goalie was at his best in the third, stopping the Warriors on several close-range chances, including a sliding blocker save, to help the Mustangs end their championship season at 27-3-1.

Warroad finished its season at 28-3, one victory shy of the school record.

“This young man won the game for them,” Hasbargen said. “I thought we were the better team out there. I don’t know what you people thought, but I just felt we had more scoring chances.”

Warroad had a 36-24 edge in shots on goal, but it had trouble containing the Mustangs’ speedy forwards. Joe Rehkamp, who will play hockey at Air Force, flew past the Warroad defensemen on several occasions.

Rehkamp, one of two seniors on the team, led the Breck offense with one goal and three assists.

“They had tremendous speed. Our defensemen were probably not used to that,” Hasbargen said. “He got by us a few times. We kind of ran into the same thing against Moorhead (during the regular season) with their speed.”

A wild first period ended in a 2-2 tie before Breck took control in the second with two goals on special teams.

Forward Reid Herd redirected a nice feed from classmate Rehkamp past Warroad goalie Jason Goldsmith at 7:43 while the Mustangs were skating shorthanded. Michael Mooney scored a power-play goal from the high slot at 14:39 for a 4-2 lead.

In the third, Wesley Iverson scored on a breakaway at 13:01 for a 5-2 lead. Warroad answered at 14:58 on a goal by Dane Shaugabay before Breck sealed it with empty-net goals from Rehkamp and Brenden Yates.

Les Larson, in his first season as Breck head coach, said his knows a lot about the history of Minnesota high school hockey. And Warroad’s tradition was not lost on him.

Breck, of Golden Valley, won its third state title. The Mustangs were unbeaten in their last 24 games, with its last loss in 2008. Warroad, which had a 13-game winning streak snapped, was searching for its fifth title in 20 tournament appearances.

“We’ve been down here many times,” Hasbargen said. “Second place is not what we wanted. We’re not satisfied. It’s tough.”
Posted by Oshie-Blogs at 7:02 AM